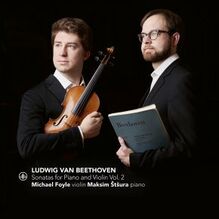 BEETHOVEN: Sonatas for Piano and Violin (2021)
​Watch the video about the project here

'more Classically contained than Kremer and Argerich (DG), better musically balanced than Menuhin and Kempff (also DG) and less interventionist than Faust and Melnikov (Harmonia Mundi) ... By avoiding any hint of big player rhetoric or self-conscious interpretative tinkering, Foyle and Štšura keep the mind focused on Beethoven’s wide-ranging inspiration and radical thought patterns ... The result is an engaging set of performances that cast fresh light on this much-recorded area of the repertoire.' - BBC Music Magazine

​'these performances are some of the very best I’ve heard among a recent spate of entries in this repertoire. In fact, I’d say they’re well-nigh ideal. Foyle produces an absolutely gorgeous sound on his 1750 Gennaro Gagliano violin, with modern setup. The tone is of a purity and alluring sweetness above the staff, while sacrificing nothing of robustness on the G- and D-strings. His bowing is strong and incisive but always smooth, evincing no grittiness or roughness, even in the execution of chords and forte passages. Vibrato is audible but discreet ... He never attenuates his tone in soft passages to the point where he disappears beneath the piano. Balance between the two instruments is consistent and equal, as is the balance between the two players in matters of phrasing and other interpretive details. The recording is excellent.' - Fanfare

'Recording Beethoven's complete violin sonatas in Mechelen, the home of Beethoven's forebears, during a period of near-global isolation revealed to this Scottish-Estonian duo new layers of emotional and psychological intensity, and you certainly hear this in the rapport between the two players ... the personality and the integrity of this duo are evident throughout ​... The evident care taken by both players and the attractive variety of tone colours Foyle draws from his 1750 Gagliano make the prospect of the final volume in this series a tempting one.' - Gramophone

'From beginning to end they put Beethoven in the right light: with spontaneity, joie-de-vivre, a little bravura but also adding tranquility, subtlety and drama where necessary, this all with outstanding timing... with this release they deserve a high position among the many acclaimed recordings available' - Luister Magazine (Netherlands)
​ 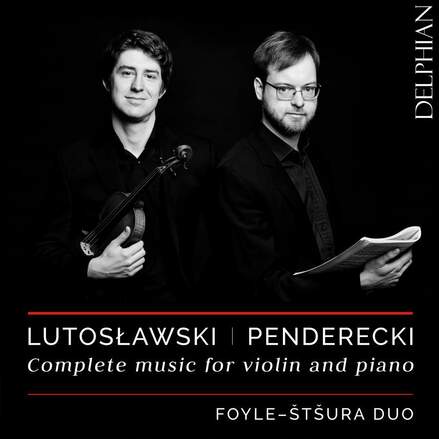 LUTOSLAWSKI AND PENDERECKI: COMPLETE MUSIC FOR VIOLIN AND PIANO (2019)

'This is an absolute cracker of a disc and right from the first note, one feels that one is hearing something extraordinary ... The performances are responsive, intelligent and very polished ... a performance that will have you sitting on the edge of your seat' - ​Classical Music Daily

'Lutosławski wrote Subito as a violin competition test piece towards the end of his life, and here it shows off the technique not only of the violinist Michael Foyle but that of the pianist Maksim Štšura. Both players catch its beauty, and they are equally persuasive in Lutosławski’s haunting Recitativo e arioso, earliest (1951) of the pieces here. More often heard in its version with orchestra, Partita is spikier, and Foyle and Štšura handle it with commanding aplomb. The Three Miniatures, Webern-like in their compactness, certainly belong to Penderecki’s avant-garde period, and the Sonata No. 1 is his first published work yet highly accomplished — and enjoyable thanks to this Scottish-Estonian duo’s musical intelligence.’  - BBC Music Magazine

'The playing is gutsy, alive and alert, these short pieces brilliant scene setters for Penderecki’s fiery Sonata No 1. After the same composer’s aphoristic Three Miniatures and Lutoslawski’s Bartók-influenced Partita, Penderecki’s Sonata No 2 (composed in 2000), the most recent of all the works represented, is a gripping apotheosis, its anguished final movement disappearing high into the musical stratosphere.' - The Scotsman 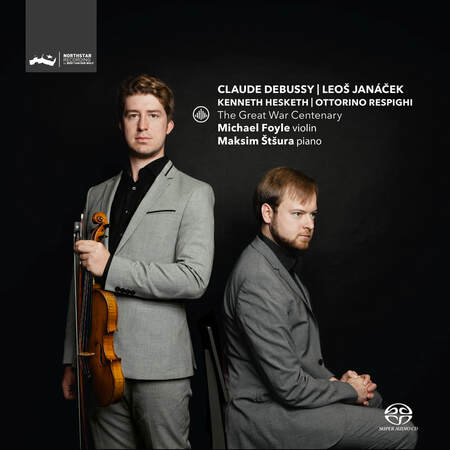 'impassioned, richly detailed performances of three wartime works by Debussy, Janacek and Respighi, and a moving and troubled musical meditation on death and dissolution from Kenneth Hesketh' - The Daily Telegraph (UK)

'The opening bars of a CD are often enough to know that you are dealing with musicians of an extraordinary calibre ... the duo delivers a dream debut, admirably telling a story completely in symbiosis and in service of the music.' Rating 10/10 - Luister (Netherlands)

'a glowing and growing star ... beautiful tone, compelling agility and persuasive presentation, those are some of his hallmarks ... teamwork (is) impeccable. Both shifting so admirably from one musical idiom (French: Debussy) to another (Czech: Janáček) and yet two more totally different ones (Italian: Respighi; British: Hesketh). How much better would you like to have it?' - HR Audio (France)